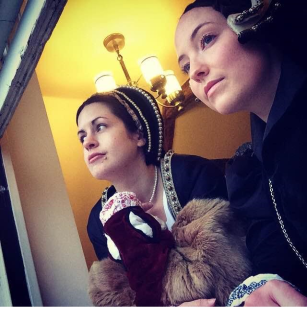 Lucy Charles and Rosanna Heverin, costumed heritage interpreters, Tudor historians and women’s history advocates, discuss the day their interpretation of the Boleyn women passed the Bechdel Test at Hampton Court Palace, and argue for the inclusion of intelligent females in heritage interpretation every day, not just International Women’s Day.

For nearly 500 years, Anne Boleyn has been interpreted by popes, princes, ambassadors, historians, actors, writers and, for the last 20 odd years, historical interpreters. She has been the revered mother of the English Reformation, a romantic heroine, a naïve tragic victim of Henry VIII’s tyranny, and an ambitious ‘heretic.’ Anne has appeared as a named character in 41 television and film productions; her portrayal unique to her socio-political environment. Intertwined with interpretations of Anne are varied interpretations of Jane Boleyn, Lady Rochford – Anne’s sister-in-law. A darling of Henry VIII’s court before Anne came into the King’s view, Lady Rochford has been shown as the vicious reason behind the Boleyns’ downfall or a manipulated weak woman, intimidated by her in-laws.

On International Women’s Day (IWD) in 2013, History Riot’s resident contributor Rosanna Heverin and fellow historical interpreter and actor Lucy Charles were performing as Anne and Jane Boleyn respectively at Hampton Court Palace for Past Pleasures, in a daily scenario called ‘Making History Happen.’ This live interpretation performance explored the events of the late 1520s – Anne Boleyn was angered that the French Queen had refused a meeting with her in an imminent state visit to France with King Henry VIII, and was engaged in a religious debate pushing Henry to consider the radical ideas of William Tyndale’s The Obedience of a Christian Man. At midday there was a scene in which visitors were welcomed by the Boleyn women, who, unaccompanied by the men of court, would discuss these events from their point of view. Usually, the scene played out as an exploration of the role of marriage in Tudor society, and gave interpreters the chance to unpack Henry’s marital history for the visitors.

“By moving the dialogue away from a ‘romantic’ discussion, both women had the chance to be portrayed as well rounded, intelligent, entire people in their own right.”

Seated on cushions in the middle of the Great Watching Chamber of Hampton Court Palace, we encouraged visitors to sit and share opinions and garner advice in an improvisation which discussed politics, gender roles, society, court etiquette, issues of religious tolerance and the human attitude to change, against the back drop of the Tudor world. By moving the dialogue away from a ‘romantic’ discussion to something more substantial, both women had a chance to be portrayed as well rounded, intelligent, entire people in their own right. Anne was able to discuss her reformist beliefs, Jane was able to showcase her political intelligence, and the audience were able to see the similarities and differences between women now and then. It also provided a wonderful opportunity for us to share individual research and interests about women’s history in Tudor England, and to develop more informed ideas as historians and heritage interpreters around the character and the motives of Anne and Jane.

Anne is an important character to get ‘right’. Amongst the disagreements of contemporary sources, there is one aspect all agree on – she was not conventionally beautiful. It was her wit and her intelligence that captured the King’s attention, and she was an advocate of education for women. These traits are vital to communicate to young people, whose world is soaked in media images promoting ‘looking a certain way,’ and which can belittle intelligence rather than celebrating it. If heritage interpreters can use the interest Anne sparks to promote self-worth dependent on one’s abilities in young people, rather than one’s looks, then we have done a worthwhile job.

Jane is important to portray in a humane, truthful and informed way. Most interpretations of Jane in literature and live/recorded media seem universally damning, accepting that she and Anne were ‘enemies.’ Some visitors, knowing the destinies of both women, can be incredibly judgmental towards them – one colleague of ours was literally chased upstairs when interpreting Jane by a visitor particularly furious at her ‘betrayal’ of Anne. It is important to find something likable, or relateable, in the person you are playing, no matter how reprehensible their reputation by today’s standards.  What sort of woman assists in the condemnation and subsequent deaths of her husband and sister-in-law? Well, perhaps one who understood the ruthless nature of court, who knew that to survive the inevitable death of her husband she would have to collude in his guilt.

“They were no longer familiar caricatures, but real women who had lived, breathed, hoped, plotted, debated and laughed”

So on that IWD in 2013, the audience heard things about Tudor society and how it worked that wasn’t just about two women’s relationship to and with Henry VIII. After a brilliant, interactive half hour, Anne and Jane emerged as remarkable individuals, intelligent enough to engage in polite, lively and informed conversation, who respected each other’s positions and opinions, and could survive and thrive at court (albeit only for a time). They were no longer familiar caricatures from popular history, but real women who had lived, breathed, hoped, plotted, debated and laughed in that very room.

It was an experience that only costumed interpretation could have provided in such a vivid, immediate fashion. 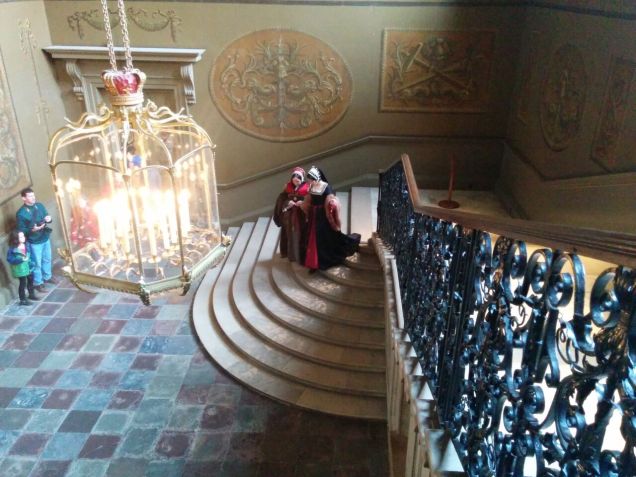 The feedback received from visitors in the audience was wonderful. Instead of asking Anne about Henry, or Jane if she really betrayed her family, we were asked political questions, questions about law and religious reform – questions that are usually directed to our fellow (equally brilliant!) male interpreters. Visitors that day went away knowing that Tudor women were not all simply fodder to Henry VIII’s marriage cannon, but were influential, intelligent human beings who had to operate and find their standing in a world where they were seen as chattels and the property of their fathers and then their husbands.

Given that women make up 50% of all historical populations, being able to showcase their remarkable abilities as individuals is vital. Heritage interpretation brings history to life for visitors, and it must always include these women who used their strengths and smarts to build the world we live in today. History where women are solely romantic interests and men are the leaders is wrong and damaging. Children particularly need to see a world where men and women stand as equals. Men and women have been equals throughout history in many ways, and it’s time that this is illustrated at every historical site, every day and not just for one day in March.

To find out more about her, visit www.lucy-charles.com.

Rosanna Heverin is a museum educator, heritage interpreter and resident contributor and editor of History Riot.

4 thoughts on “The Boleyns and the Bechdel Test”